I spent this weekend in Monterey with my sister and her three offspring in order to prepare for a job interview at a sailing school on Monday. Getting as happy as possible was my highest priority. We wiled away Saturday at the Monterey Bay Aquarium, ogling the otters and the delicate captive wonders of the sea.

Easter Sunday, my sister, nephew, and two nieces went to mass, and I, heathen that I am, headed with my tiny old Chihuahua friend Coco to Lovers Point Park in Pacific Grove not too far away. My sis and I had agreed to meet there for a picnic after mass. Coco and I explored, climbed rocks, took some photos, and drank in the drizzly salt air while we waited. I remembered how much I enjoy spending time with myself (and Coco of course).

A girl also asked to take a photo of Coco with her angel candle, which I thought was pretty special.

By the time my sister and her brood arrived, it was raining steadily. There was no shelter anywhere in the park, so a picnic was out of the question. The eldest niece quickly pulled up a list of local restaurants on her smartphone, and together we all decided to brunch at a little place called Crema on Lighthouse Avenue.

Crema has a nice collection of blue glass bottles on display. Most of my personal hygeine items are homemade and kept in blue glass bottles, my favorite wine glasses are blue, and I have some decorative blue vases too. While admiring Crema’s collection, I commented to my sister about how much I love blue glass.

While we we enjoyed our meals at Crema, my sister retold the story of how she “summoned” her eldest daughter at Lovers Point. About 18 years ago, she decided she wanted to have a baby. During a visit to the park, she picked a spot to sit on the rocks and called for her firstborn to come into being. We had the fun idea of going back to Lovers Point after brunch so I could sit in that very same spot to it for myself. I took a little video of that moment, which I will post on my YouTube channel at a later time.

Are you still wondering about the blue marble? Don’t worry, we’ll get there soon.

I described Novaturient as a 28-30 foot long, bluewater capable, cutter-rigged sloop. I then filled myself up with happy thoughts about my sweet little bluewater boat. I told myself all I need to do now is get ready for her arrival. Landing the job at the sailing school, or another similar job, would be an important part of this preparation.

I asked my sister and her daughter to join me for a photo and to let me stand between them so their good juju would rub off on me. It couldn’t hurt. 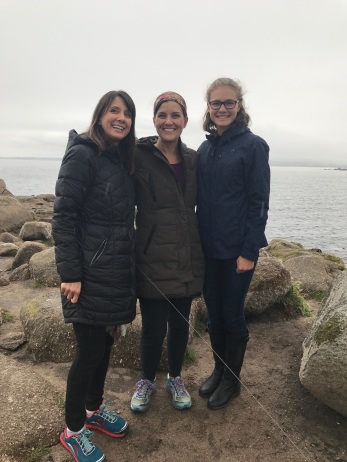 After that, the rain began to fall even faster, pushing us to hit the road. I hugged my sister, nieces, and nephew good-bye. They headed back towards the central valley and I cruised north up Highway 1 while the rain continued to fall.

I noticed that the crack in Daisybelle’s windshield had spread to span half its width. I also had to use my wipers sparingly, as one of them had grown a long tail that threatened to detach as it whipped giddily in the wind. It reminded me of an unruly telltale, the sign of a sail in need of easing or trimming.

My VW New Beetle Daisybelle has lots of annoying little problems, but she runs strong. The cracked windshield and whipping wiper telltale could not bring me down. I was so happy to be alive and excited for the future. Every time I caught a glimpse of the Pacific Ocean to my left, I let it take my breath away.

Then as I passed through Moss Landing, I saw a sad, decrepit little old sailboat sitting trailered on the left side of the road with her mast lashed horizontally to her deck. Someone had painted the word “PHOENIX” in big black letters on her starboard side. As I passed her, I saw a For Sale sign perched on her port bow. That poor little Phoenix appeared to be in desperate need of someone to rescue her from the ashes before the rain dissolves her into the earth.

I felt a little sorry for her, but I know that I am not her rescuer. It’s not yet time. But because the Novaturient logo features the image of a phoenix rising from a sailboat, I laughed out loud.

A few minutes later, I spotted a man walking on the side of the road in the rain with a very fluffy black dog and cart in tow. The back of his cart had a red and white sign on it that read “Trek for Mental Health.” I knew immediately I wanted to help him out with a few dollars, but I had no cash on me. About hundred yards later, I passed a tiny gas station and convenience store. I turned left into a little nursery driveway, then went back the way I came.

As soon as I had the cash in hand and turned to walk out of the tiny convenience store, hoping to catch the man on the road, in walked Jethro! He gratefully accepted the $15 I offered. We struck up a conversation. I guess you’d say we are both on a mission in our own way, we both love sailing, and we both have dreamed of sailing around the world one day.

After taking a roadside selfie with Jethro and photo of him with his “chariot” and his canine angel Akyra, he took a clear turquoise blue “shooter” marble out of his pocket. He told me that a man named J. Nichols had given it to him just a few miles back. The man didn’t tell Jethro if the marble had any special meaning, but asked him to pass it on, and said he would know the right person to give it to. (It turns out that the marble man is Wallace J. Nichols, biologist and author of Blue Mind, a book about the scientific research revealing the healing nature of water and the ocean.)

Then Jethro took a second shooter out of his pocket. This one was rich cobalt blue. He explained that he had just found it right at his feet on the side of the road shortly behind he decided to go into the convenience store. Unlike its flawless turquoise brother, this ocean-blue marble bears dings and scars on its surface from the time it spent lost, forgotten, and tumbling about on the roadside. Who knows how that marble got there, or how long it waited there before Jethro came along.

As soon as I saw the cobalt blue shooter in his hand, I knew it was for me. But Jethro didn’t give me the marble. I wasn’t disappointed, because the happy day and meeting him had been gift enough. Instead, we exchanged contact information, hugged several times, and promised to keep in touch. As I drove away, I saw him in my rear view mirror waving wildly. It seemed to me as if he were saying, “You go girl!” with his arms. A minute later, I received a text message from him. I had misunderstood his arms, and laughed again.

I pulled into the same nursery driveway as before, stopped to respond to his message, and a minute later, headed back up the road for my marble.

Jethro thought I should google to see if there was symbolic meaning for a blue marble. He thought that the universe must be trying to tell me something. This is what I found:

I’m wary of magical thinking, but this is just too much fun to resist.

The stigma of mental illness compels many people who experience depression, anxiety, PTSD, bipolar, and other disorders to suffer in shame and isolation. All too often, this isolation has fatal consequences.

The CDC’s statistics reveal that suicide was the tenth leading cause of death overall in the US in 2014. Among individuals aged between 10 and 34 years, suicide was the second leading cause of death. Alarmingly, there were more than twice as many suicides (42,773) in the US as there were homicides (15,809). More people are killing themselves than are being killed by others! What does that say about the state of mental health awareness in this country?

Spreading awareness to erase the stigma enables people to talk about their disease and seek the help they need to get well. Awareness and understanding saves lives.

And if you’re feeling blue, get yourself into or near a large body of water as soon as possible.

In the meantime, you can learn more about Jethro Daniels and help sustain his Trek for Mental Health Awareness by visiting his pages on GoFundMe and Facebook. Even a $1 donation will make a difference. If you are unable to donate, please share this post.

Thank you for your support.

As for my job interview at the sailing school on Monday… it went very well. I am hopeful.

Two smiley mouths with something to say.